Since the release of my blog in November 2017, I have continued to try and raise awareness of intimate partner abuse. In addition, I have been working to encourage my university and others to acknowledge intimate partner abuse as an issue amongst students and to provide support for those who suffer it. Here is a sum up of everything I have done so far:

Shortly after I released my blog I was asked for an interview by CCChat, a magazine on coercive control, about why I chose to write and release the blog.

A few weeks later, a follow up interview was requested in the same magazine in which I was asked how the blog had been received and what had happened since.

For Women’s Day 2018, I was absolutely delighted to be featured by Mums in Need who asked me to write a short summary of my experience for their Facebook page.

In February 2018 I was approached by a choreographer producing a dance show called A Luta Continua (The Struggle Continues) incorporating the experiences and struggles of three women, one of whom they wanted to be me. The dance was performed multiple times to the public in Cambridge and very well received. I asked them to put on an extra performance at my new college at which I gave the introductory speech, choosing to talk about why validation is so important to survivors of intimate partner abuse. The whole experience meant a huge amount to me and I really enjoyed being a part of it. 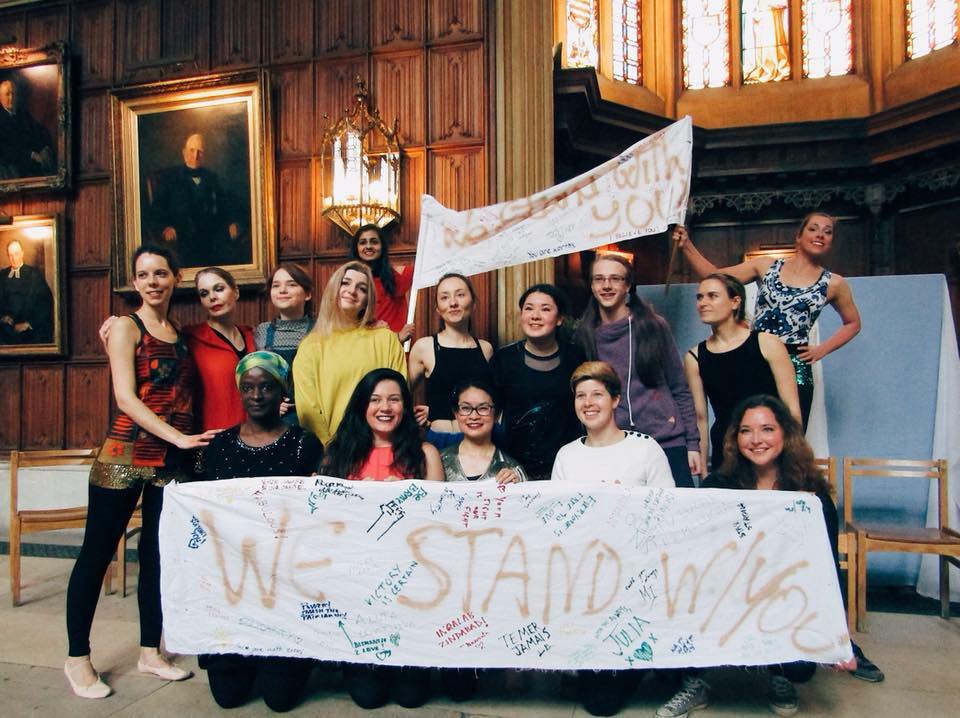 In May 2018 I had an article published by The F Word on the mental health impacts of court cases on victims of intimate partner abuse.

In June 2018 I was also fortunate enough to be invited as a speaker at a conference on coercive control, which I very much enjoyed.

Then in July 2018 I was kindly asked by Christine Clayfield, author of No Fourth River, to write a piece about how I moved forward from my abusive relationship, as part of her #BraveMe series. I particularly enjoyed writing this and it reminded me how far I had come since the relationship ended. I hope it can help others too.

A few months later, I was also invited to give guest lectures on domestic abuse in the context of the criminal justice system to criminology and gender studies students at multiple universities. I found this a very valuable experience and several of the students wrote to me afterwards to say how much they had appreciated the sessions.

Encouraging better handling of situations of domestic abuse at Cambridge

After the trial, I moved to a new college in Cambridge and happily, I was elected as Women’s Officer there. Among other things, I organised and ran a workshop for incoming students on sexual assault, abusive relationships and being an active bystander, something I hope will continue to be run in the years to come. A document covering the content of this workshop can be found here:

On a larger scale, I have been working to improve the University’s sexual assault and harassment policy and to have intimate partner abuse incorporated into it. I set up a group of concerned students and we have been having regular meetings with experts and university staff to work on this. In 2018, we released a report on the issues we see with the current policy and recommendations for improvements. This has been sent to relevant staff members at the University, including the Vice-Chancellor who has assured us it is being taken forward.

Some changes have already been made and I am currently assisting with the website redevelopment suggested in this report.

Following the release of the report I wrote an opinion piece for Varsity (the Cambridge University student newspaper) on why Cambridge and other universities should implement policies to cover intimate partner abuse.

This was then followed shortly after by an opinion piece in The Guardian.

I am very happy to say that Cambridge have now changed their regulations to specifically include intimate partner abuse. I hope other universities follow suit!

I then went on to produce another opinion piece for Varsity, urging colleges at Cambridge to develop their own survivor-focused policies for sexual violence and intimate partner abuse as well as the wider university body.

As a result of my work on abusive relationships at both College and University level, I was awarded the Provost’s Prize in 2019, which I couldn’t have been more honoured to receive. Through raising awareness and campaigning for change, I really feel I have come full circle since my abusive relationship and I am so grateful to have been able to use my experience to help others.